According to the panel on the very fabulous BBC podcast, The Infinite Monkey Cage, The Brain, the brain is the most complex thing that we know of in all the universe. Nature drops the brain into the world half baked and lets the environment wire up the rest. Your local language, culture, beliefs and experiences do the rest. This is very different from many other animals. Our flexible intelligence allows us to learn what’s going on and is one of the reasons humans have adapted to almost every spot in the world and are exploring the possibilities to go beyond.

This century we have learned an incredible amount about the brain including how baby brains grow. Last century we thought brains arrived almost like a smart phone with pre-loaded apps and that it developed along fairly well set lines. Not any more.

We also thought that babies were some how sub cortical and their frontal lobes were effectively silent. We now know that human babies are incredibly responsive to whats going on, picking up clues from the world from the moment of birth, if not before.

This provides an insight into how much the world impacts the brain. The brain’s wiring becomes more complex as it responds to the world. The input is really important for young children. There are cases of feral children, who because of mentally ill and abusive parents , locked in closets and deprived of love and learning became very damaged. The same thing happened in Ceausescu’s Romanian orphanages where tens of thousands of kids didn’t get hugs and talking became very impaired.

Removing entire brain hemispheres from children suffering from bad seizures is now common practice. If you do this for children under the age of eight, in a practice known as hemisphereectomy, the children are to the large part fine and have better lives afterwards; that’s why the surgeons do it. Studies have found no significant long-term effects on memory, personality, or humor and minimal changes in cognitive function overall when you remove half their brain! They often have a slight limp on the other side of the body but cognitively they are fine. The brain seems to say “Oh, I don’t have that real estate any more so I’ll wire up those functions onto the remaining half” Indeed sometimes babies are born with only one hemisphere . When you image those brains you find that those functions that would normally exist on the missing side have again been ported over.

While the first seven years of life don’t fully determine one’s joie de vivre, the rapidly growing brain lays down sturdy foundations for how they will communicate and interact with the world during these years, setting the stage for the next phase of growth. These years lay down the foundations for our beliefs around how the world operates and their place within it. Foundations that are exceedingly difficult to knock down and rebuild.

The criticality of the young mind is why the world bank created “The First 7” conference to discuss early childhood development. The first seven years are key to a successful life. Indeed the first 3 years are hyper critical with science suggesting that the first 1,000 days are the most important in a child’s life. The world bank goes on to say that a positive start in life helps every child to develop to their fullest and is critical for the advancement of all society.

Many philosophers point to the beauty of the child mind. Nietzsche’s ‘s thesis of the camel, the lion and the child is my favourite, believing that we are at our best, when we approach life with a child’s open mindedness, curiosity and awe. He compares that state to the majority of us who are either beasts of burden or prowling around on the attack.

Moroku built ChoreScout, our white label mobile banking application for children because we believe that financial fitness is important for the world and that the very best place to have this impact is early on, bringing children into the money system understanding the basics and going into the world with great beliefs and values around money.

Teaching adults about saving, lending, debt and credit is leaving it too late. For financial institutions who want to lead and have a meaningful impact, we are very open to sharing our vision and platforms.

A child’s mind is not a container to be filled, but a fire to be fueled – Dorothy Brande (sic) 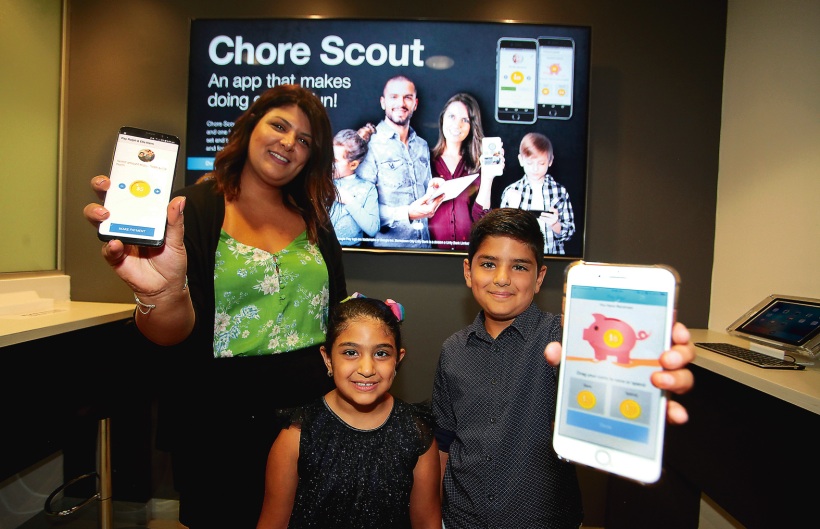 Teaching young adults financial literacy is nothing new. But companies like Greenlight and Copper have seen strong investor interest as this younger generation expresses interest in investing and parents seek out technology to guide them.

Investors in the space see the potential in these platforms as a way of converting users into lifelong customers. By building trust among a younger digital banking customer base, some investors believe there’s lots of long-term value, especially as these startups grow with their users.

Beyond teaching the younger generation to be more fiscally responsible, these apps build loyalty for digital banking. Consumers are generally making more informed decisions, and they’re frequenting brands that they can build trust and more personal relationships with.

If a banks and Fintechs can capture their loyalty early, it can translate into loyalty or familiarity with other offerings.

By targetting a specific age demographic these companies can grow with their clientele. The companies can follow their customer base into college, when they start to work or when they transition to other phases of life.

Youth banking also “represents billions of dollars of spending power untapped by any significant digitized financial product,” PitchBook analyst Ryan Vaswani wrote in a November 2021 report. And many of these so-called neobanks are looking for a competitive advantage by tapping into new demographics.

As of  November 2021, startups in this space had raised nearly $6 billion, according to PitchBook data. Other startups gaining traction include Greenlight, which gives kids and teens the chance to save and invest their allowance through its app. It also offers a service where kids learn financial literacy through gamified lessons. Then, parents can push the “green light” when they think their child is ready to invest for real. Greenlight has also partnered with JPMorgan to offer a debit card for kids. Last year, the company raised $260 million and was valued at $2.3 billion.