As Moroku grows it’s important that the team understands the domain we’re in. Banking and payments is a complex beast and it’s changing fast as technology and financial services collapse into one to create a new industry, FinTech. In order to assist the team get up to speed so we build relevant innovative products I wanted to start summarising the structure and the opportunity.

Social, cloud, mobile and lean business models are reducing many of the traditional barriers of entry into banking and payments. In a recent report by Cap Gemini and the RBS, traditional banks’ market share in non-cash payments is projected to decline to half of the forecast 800 billion non-cash transactions that will be made in 2024. The central banks report that non-banks already handle almost 300 billion transactions every year, the bulk of which are retail payments. These volumes are so significant that the impact on the way we consume public services, business activity and go about our day to day lives will be widely felt as the provider mix as well as the products themselves change.

Whilst non-banks have been participating since the 1950s with charge and credit cards, the trend towards non-banks is being pushed along by:

Non-banks are organisations whose main business is not related to taking deposits from the public and using these deposits to make loans and gather revenue through net interest income – the difference in the interest rate between deposits and loans. The internet and mobile have provided a large opportunity for non-banks to enter banking and payments by:

Where non-banks, such as telcos and mobile operators have existing and large volumes of existing customers, the opportunity seems hard to ignore. Orange, Vodafone and Airtel have all demonstrated this with their mobile payments platforms. So too it was when eBay’s rapid land grab as an ecommerce portal provided a fabulous launch pad to scale out fast by buying the 4 year old PayPal for $1.5bn in 2002. As well as paving an opportunity for existing players, technology is also providing an opportunity for new players, such as Square and Mint to enter existing markets.

When it comes to payments, non-banks are getting involved in a variety of payment types including cards, transfers, direct debits, e-money, loans and remittances. They can also participate in a range of functions, operating at the front end, providing services directly to consumers and businesses, operating at the back end by providing services such as clearing, settlement, fraud detection and anti-money laundering services to banks, operating retail payment infrastructures (e.g. Visa, MasterCard, China Union Pay) or play right across the spectrum, such as PayPal.

The choice of position is largely dictated by a selection of which step, or steps, in the process they choose to engage. The diagram to the right illustrates the various stages of the process at which a provider may play. 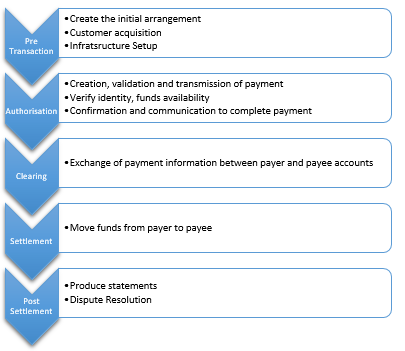 Digital money providers have an ability to play right across the process and do. This end to end control makes it highly attractive to new entrants as they don’t have to engage, pay or rely on anyone else.

Outside of digital money, most non-bank providers tend to focus on the pre transaction phase with banks picking up the clearing and settlement stages before handing back post transaction services to the initiating provider, according to research done by the Bank for International Settlements (BIS).

Payment flows are often described using a four corner model, identifying the traditional relationship between customers and their banks. Two participants in a transaction each have their own bank who ultimately settle the transaction between the parties, creating 4 parties and therefore the 4 corners to the model. In this depiction, front end providers insert themselves between banks and the customers, while back end providers would sit behind the banks, un-noticed by the customers. In each and every one of the components depicted, non-banks providers can and increasingly are providing services.

End to end providers collapse “Payer’s Bank and Payee’s Bank into one “three corner model” and eliminate the need for any 3rd party clearing and settlement services. The rub under a 3 corner model is that there still needs to be a mechanism whereby money can enter and exit the system. M-Pesa is a great example of such a three corner model, whereby Safaricom owns the airtime that is exchanged by payers and payees but people still need to rock up at an Agent and handover or redeem cash. Digital currencies and P2P present great examples of where banks are largely removed from the entire process, other than as an initial funder or exiter of the system i.e. pay in or pay out.

New entrants will look to enter the payments space if they believe they can derive economies of scale or scope from a new platform. Economies of scale derive from releasing incremental profit as more units are sold. Economies of scope derive from increased profit as additional products or capability are added to the platform. Such scale and scope can however be hard to achieve in the short term. As a network service, payments is highly dependent on the famous network effect, made famous by the telephone and latterly the fax machine – they only become useful once a lot of people, or at least the people that matter have one too. This requires either significant capitalisation or partnering to cover the gap of time or capability between launching a product and lots of people using it.

These models provide ideal lenses through which to identify new business opportunities. Economies of scale can be derived by non-banks by specialising and therefore becoming very efficient at just one thing as opposed to banks who by necessity must be jack of all trades. Scale can also be derived by selling a service to more people including banks. Square is a good example of this, but having a laser focus on their mobile payments offerings and targeting a global market. In Australia Cuscal, provides payment economies of scale to the 100 or more credit unions who server over 7 million consumers. These credit unions have been able to deploy technology solutions to their customers that rival the big four, by amalgamating their resources and effectively outsourcing it to Cuscal. Individually they would have almost no chance to compete.

Most of this spells opportunity for banks and non-banks alike. Banks have an enormous amount of trust. When it comes to handling large volumes of payments and money, such as that tied up in retail mortgages and business lending it is hard to imagine a world where the history and governance of banks and the central banks that hold them together are no longer warranted, or valued by large swathes of the population. It does however spell a new world of competition and cooperation between banks, non-banks, old guard and start-ups. As banks are faced with the competing challenges of running day to day operations and hitting quarterly returns, smart movers such as BBVA are embracing non-banks and start-ups in particular to create new businesses at a pace and scale they can’t match. This is particularly likely in areas that are new or complex, technically or regulatory, such as mobile payments and digital currencies. How for example does a bank launch a digital currency when so many of the central banks are highly sceptical, seeing them as the preserve of crime and the whole concept appearing somewhat counter preservationist? On the flipside ItBit has just raised $25 million in funding and become the first virtual currency firm to receive a charter from New York state’s financial regulator, enabling the exchange to open its doors to customers throughout the US.

In Payments 102, we’ll look at some of the regulatory conditions under which the systems operate and why risk management is a fundamental part of not only how banking operates but how it will either block or enable banking and payments to occur going forward.

Payments Today 102 – What Lies Ahead