ASIC and the ABC are on the hunt for unscrupulous Pay Day lenders. Pay Day lending is the provision of small, short terms loans to people that require financial cover to pay day. Annual Percentage Rates (APR) can exceed 1000% as advertised by www.payday.uk “£230 borrowed for 28 days. Annual interest rate of 292.2% (fixed). Total amount repayable by one repayment is £281.52. 1297% APR representative” In Australia, Good2Go loans get going pretty fast with a 50% establishment fee. 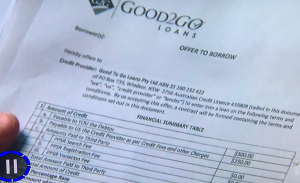 The National Consumer Credit Protection Act 2009 (National Credit Act), features a number of measures to improve protection for consumers who borrow money for personal, domestic or household needs and to deter predatory lending practices. Under the act, credit contracts for $2000 or less that have a term of up to 15 days (referred to as a ‘short term loan’) are now prohibited.

This hasn’t stopped many people finding Pay Day loans – i.e. loans that provide cover till “pay day”. Even when that “pay day” is a social welfare benefit. Multiple providers can be found preying on the financial disadvantaged with massive consequences as highlighted in the Four Corners episode – The Game of Loans.

To be fair to ASIC they have been doing their best to weed out the crooks. Since 2010, ASIC has netted close to $2 million in refunds to over 10,000 consumers who have been overcharged when taking out a payday loan and have commenced proceedings against seven companies identified as behaving systemically non-compliant with the law. Last year ASIC successfully took civil penalty action against The Cash Store Pty Ltd and Assistive Finance Australia Pty Ltd for wholesale responsible lending failures and engaging in unconscionable conduct. ASIC held the view that The Cash Store provided unaffordable loans to a large number of their customers who were on low incomes or receiving Centrelink benefits. In addition, the company acted unconscionably and unfairly in selling insurance for these loans to these customers when it was unlikely that they could ever make a claim on that insurance.

A research project conducted by the regulator identified 2/3 of 288 files reviewed to have failed the suitability criteria for a pay day loan, 54% of the borrowers were found to be return customers and 8% were likely to default. But its largely a game of “whack a mole” with new entrants, often sexy social mobile versions such as Nimble with their “$1600 in 60 minutes” campaign, K24, Cash Convertors and others doing their best to get money to people “in need” as echoed by the CEO of Cash Convertors, Peter Cummins, on the 4 Corners episode

There are 10 million Australians that don’t have access to a credit card. Where are they going to get credit?” For me this is the crux of it. Regardless of the number, there are good reasons people can’t get access to credit Mr Cummins and as a financial services provider we’d be hoping you understood this. There are safeguards put in place by the regulators and the banks to ensure that people don’t get in over their heads in debt. There’s plenty of evidence that the regulators and the banks need to keep a close eye on the situation. Australia leads the world league in terms of leverage and personal debt as the graph next outlines, charting household debt/disposable income over time. The pink line shows Australia’s increasing dependency on debt and 177% is a big number. Total household debt stood at $1.84 trillion at the end of 2013, equivalent to $79,000 for every person living in Australia. Unfortunately when we add the New Zealand trend it’s not the worm from the Cricket World Cup.

Westpac was called out for funding many of the PayDay lenders, such as Money3 and The Cash Converters, to the tune of billions of dollars. Meanwhile some bright spots are emerging. The NAB has been backing Good Shepherd MicroFinance. Adam Mooney and his team are providing financial advice for people caught in the Payday lending trap and helping them dig out. Adam says the human impact of payday lending was damaging for everyone in Australia. He advises people caught in the trap to consider taking out a no interest loan that was backed by state governments and the National Australia Bank. Instead of paying up to three times the value of a fridge, furniture or bed through a fringe lender, simply pay the cost of the item itself over 18 months with a no interest loan, backed by the Australian and State governments and NAB”. We know that the digitisation of these types of services is only going to increase. Digital Providers like Nimble have got slick design skills that provide very slippery on boarding processes and guide customers to move the bar to the right.

There is no doubt that the regulator needs to be resourced and enabled to protect the highly vulnerable in this area. It is also incumbent on the traditional providers, particularly those that press a strong corporate and social agenda to do two things:

2/ Provide digital banking services that are truly focussed on customer success and designed to help people get their financial lives together.

Banking in the Crowd