Losers have goals. Winners have systems.

Financial wellness, like physical wellness, comes from stacking a series of good habits which, like interest, compound to achieve better outcomes. Behavioural science has illuminated the frameworks for building habits. These have been baked into Moroku Odyssey and its counterpart design methodology, On-Ramp, to establish digital financial experiences that create positive financial habits and through those, action and financial wellness. Without these, financial goals are of limited value, made up fantasies, routinely resulting in failure.

Tim Ferris interviewed Scott Adams when working on Tools of Titans and from which the meme, “Losers have goals, Winners have systems ” was published. The essence of Scott’s idea is that we should choose projects and habits that give you skills that inevitably allow you to succeed.  Scott asks us to ask ourselves “What persistent skills can I develop over short term goals? ” The former has a snowball effect, while the latter is a binary pass/fail with no consolation prize and often times, disappointment. Many have a goal to be a millionaire, others a billionaire. The winners and losers are separated by their systems and habits.

In order to drive engagement in banking, goal setting has become a popular feature in many digital banking experiences. Yet they’re working neither for neither bank nor customer for three core reasons:

When most goals are set within digital banking today that is all that happens. The goal is set. You get a graph, with a line and some numbers, very little else and very little post goal engagement. This looks very different to what happens when I set up some goals on an iWatch. When you dig in, success is very little about goal setting and much more about habit building. In Apple Fitness, the user opens the app, set daily goals in terms of activity, exercise and standing up time and are then presented with habit building frameworks to get there.

Success is not about goals but habits. Many of us brush our teeth each morning and night. It’s kind of a goal but it’s not very SMART – Most of us would just like to keep our teeth. We didn’t set the goal, our mums, dads and dentists created the habit when we were children and we kept it up. If we want to get great at things, we need to form habits around them. Tim Ferris in his Tools of Titans books talks at length of this as he interviews his Titans. If we want to be great, we have to develop the capability, we have to develop the day-to-day habits that get us there. There is nothing more powerful than a good habit. Nothing that holds us back quite like a bad habit. We are what we repeatedly do.

The work on habit building is often attributed to have begun in1898 by Edward Thorndike and his puzzle box for cats. One such puzzle box contained a lever that opened a door to food. At the beginning it took the cats an average of 1.5 minutes to open the door. By the end, the cats escaped in an average of 6.3 seconds. He concluded that “behaviours followed by satisfying consequences tend to be repeated”. The lesson for financial wellness here is that if we want customers to build habits, especially if those habits are initially difficult, we have to prompt them with some level of reward. This is largely ignored across financial experiences today yet are inherent to those designed by On-Ramp.

Good habits are incredibly powerful. They allow our busy brains to turn routine behaviours that contribute to our success to our unconscious and automatic systems and behaviours, freeing up our conscious mind to solve new problems and unlock new levels of success and freedom.

Research published in the European Journal of Social Psychology says it takes on average 66 days to install a new habit. Habits work by breaking big goals down into smaller micro goals that are more achievable and present opportunities for platforms to drive engagement. By breaking down the goals into smaller actions, we can wire up AI driven rules engines to trigger the release of the neurotransmitter dopamine through numerous game mechanics, leveraging the way our reward centre in our brain works.

MINIMISE – Chunk down the goals

The idea is to create action

Once the daily habits are established, the next step is to chain them. There are three components to a habit;

Its not the goal setting that’s important when trying to drive habits and in the world of finance, financial fitness. Its ensuring the engine drives the stacking of the behaviours to enforce the habits. The engine must define and pick up the cues, motivate action and enforce repetition through reward.

In the Jetski example, even once the goal was sent, we can see there was an immediate opportunity for micro events and actions (make first payment) to be taken off the cue (Goal Set) to be followed up by a Reward.

“A vegan, an atheist and a cross fitter walk into a bar. I only know because they told everyone in the first two minutes”. These three communities are well known because they are heavily linked with an individual’s identity. Their activities are more than actions and goals they are a way of life, as habits become one’s identity, you become what you want to achieve. One goes from writing a book to becoming a writer.  One goes from having a jetski to becoming a JetSkier.

As banks around the world seek to exist on purpose and seek opportunity in financial wellness, they must become more grounded in the science of what it takes to deliver change, helping customers build strong savings and spending habits by embedding behavioural economics through game design into the digital experience.

The science of taking people on journeys and building habits is the essence of Odyssey. At its core are the unique, proprietary, multi-dimensional player maps that set out the player leagues and money missions and the journeys of financial fitness and mastery. These set the direction.  The establishment of the habits and systems is then carried out by the 6 step Moroku Feedback Loop, a constantly running, if this then that, event engine to build habits. 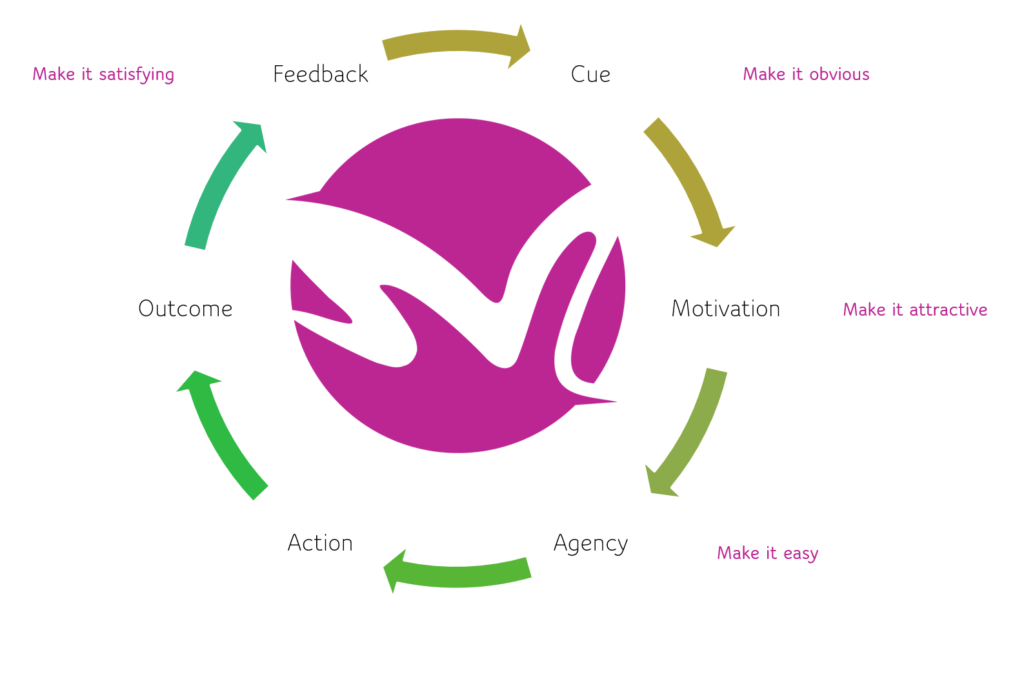 Customers enter the loop with a cue or invitation. These serve to signal that a reward is ahead, a pleasure. Feedback taps into our fundamental human need to avoid pain, seek pleasure and be recognised and makes it obvious. Motivation gives the player the reason to act, clarity around the outcome being sought and makes the upcoming work attractive.  The system then checks for agency. There is little point asking the player to commit to an action if they don’t have the resources to complete the task ahead. This can involve removing any friction as well as ensuring money and money systems are in place. Clearing agency ensures that it is easy.  Action is then taken, and the Outcome measured. This outcome is then correlated against the player map which measures player progress across time, space and motion, the engagement triad. The last step, feedback, lets the player know how they got on and if positive, makes it satisfying.

Banks have spent the last 25 years building digital user experiences by firstly making systems available to users and secondly removing the friction from the user experience. Some call this making the experience “buttery smooth”. That’s what everyone’s been doing. How is your digital bank going to be different? How will it be compelling? Helping people to be successful is a powerful platform to compete on. Success is built by stacking habits over a lifetime. As George Washington said. “Many nickles make a muckle” (an old Scots word meaning ‘large quantity’). Businesses are built from the humble work of everyday. Trees that grow strong grow slowly.  It’s the little things, the habits, stacked on top of each other that make the difference, that define success and who you are. It’s not sexy or bold, but its dependable. Deliberate, incremental, consistent work gets you there, where “there” is the launch pad for the next “there”. It’s the process not the outcome.

Multiple websites reports that a fill-in-the-blank superfood fights cancer. Guess what?  No single food will end cancer. What do we know? Eat fresh produce. Don’t smoke. Exercise regularly. It’s not sexy, but it’s key to staying healthy. It’s the stacking of habits. They define us.

Behaviour follows the status quo unless it is acted upon by a decrease in friction or an increase in fuel. Almost every User Experience designer on the planet is engaged in trying to remove the friction. We’ve removed so much of it, we now risk over thinking friction, making it buttery smooth. The smart money is on adding fuel, adding fuel to the habit bonfire. We must move away from setting goals for people that always seem too hard or boring and towards helping users stack habits and create systems for success and create systems by building banking experiences focused on powering people’s goals, not just setting them.

The Moroku On Ramp methodology helps banks define player journeys that create these habits. The Odyssey platform then embeds them into the digital experience and provides the guard rails to add the fuel to stack them. We are here to help banks win by helping their customers win and do what the bankers previously thought couldn’t be done with computers; build trust and relationships.

All banks are the same