Mental ill-health continues to rise across the developed world. Whilst the absolute numbers are expected to rise in line with population growth, the relative growth presents a pressing concern.

Population growth is a well-researched and understood field. Most studies show a standard asymptotic curve with increasingly complex and dynamic behaviours occuring in response to an increase in toxic stressors as the environment reaches its’ carrying capacity.

Much of the world today is concerned with climate change, with David Attenborough our keenest provocateur. Our planet is under unprecedented pressure, being battered by humanity. Too many forests are being cut down. Too many fish are being pulled from the sea. Greenhouse gases. Ocean acidification. Chemical Pollution. For the first time in human history, we may have pushed the planet too far. 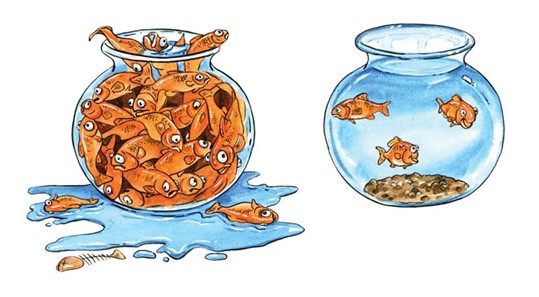 Whilst these toxic stressors and their outcomes present physically, such as increasing levels of pollutants within the supply chain, many of the adverse health outcomes are mental. 800 million people worldwide, or 11% of the global population, live with a mental health condition. It is widely acknowledged that we respond poorly to increasing extremes of social abundance and density. As the density of our urban populations increase along with increasing levels of uncertainty of where we are headed as a collective, our health characteristics, mental and physical, are regressing .

In addition to the changes brought about by the build-up of density, the changes in our lifestyles brought about by digital are also showing signs of regressive effect. Health experts allude to sitting is the new smoking. As concerning is the thing that we often do while we’re sitting: Mindlessly scrolling through our social media feeds when we have a few spare minutes (or for some, hours). As we know intuitively, and as the research is confirming, it’s not the best habit when it comes to our collective psychology. The American Academy of Paediatrics has warned about the negative effects of social media in young kids and teens, including cyber-bullying and “Facebook depression.”

A study at Oxfor University in 2022 found that participants who reported either no or very high social media use (more than 7 hours) put in lower life satisfaction ratings. “The recent adoption of social media has fundamentally transformed how humans spend their time, portray themselves and communicate,” the researchers wrote in their paper. “Most adolescents go through major sociocultural changes and life events such as moves from school to university or work. It is therefore plausible that these processes heighten adolescents’ sensitivity to the interactive, communicative, and self-portraying nature of social media, a technology they use more extensively than other age groups.”

The same risks may also be true for adults, as the addictive nature of these applications trigger more sadness and less wellbeing as we compare ourselves to others, triggering more jealousy, FOMO, FOOPO and despair. More friends on social doesn’t mean you’re more social. The awesome dance anthem by Armin Van Buren, Alone, points to a disturbing trend. “Everyone’s’ connected but no one is connecting”

We seem increasingly isolated on the internet, sat next to each other on the train. In response, researchers, government bodies, entrepreneurs and philanthropists are increasingly drawn to meet the vulnerable on their terms, within digital, on their phones in a mobile first, social and game dominated world.

As many as 20,000 mental health apps exist today, with global spending on mobile mental health applications expected to reach close to US$500 million in 2022 in a market estimated to be worth US$1.6 billion. These economics are spurred by an increasing realisation that apps can not only help address the volume of need for mental health support, but also make that support more accessible.

Two of the most popular are Calm and Headspace. Both focus on mindfulness and meditation and are meant to help individuals get support other than from a therapist or traditional mental health services.

Here are the supposed best mental health apps for 2022

Do a search for mental wellness apps and you will find very many. Research shows that mental health apps have clear clinical advantages for their users. Meta-analyses of trials covering more than 20 mobile apps found that using them can alleviate symptoms and self-manage depression significantly.

Yet whilst there are a lot of apps there seems to be a lot missing. Almost all the current apps appear to assume the player:

As games and social increasingly define the user experience, Moroku has been creating a digital design methodology that embeds social and game patterns and mechanics into the experience so that it maps to how users expect to be engaged and follow Jakobs law of engagement.

“Users spend most of their time on other sites. This means that users prefer your site to work the same way as all the other sites they already know.”

These patterns and mechanics are codified within the Moroku GameSystem platform to inject key game moments into the experience. GameSystem lives in the cloud and is integrated by way of a tokenised identity model and transaction event ingestion engine.

Moroku’s primary focus is the application of game theory to the development of financial wellbeing across the banking and wealth management industries. The company’s clients use the design process and platform to take customers on a journey of mastery as they take on challenges, build skills, unlock new capabilities and win.

Such an approach is applicable to multiple wellness systems including mental wellness, accessing three high order design principles that appear worthy of experiment in overcoming some of the assumptions and gaps within the current mental wealth application set.

Design the customer journey as a game applying concepts of mission, challenge, skill, and success as inherent to the application telos.

Collect lots of data building models around customer behaviours that identify, weight and test multiple parameters that increasingly hyper personalise the delivery of the right nudges at the right time to the player, recognising that much of the success is about being calm and celebrating those moments whilst looking out for patterns of unease.

Apply a range of game and social mechanics within the experience that are oriented around connecting the player to the broader group and celebrate success whilst acknowledging that social media influencers are as likely to be as mentally crook as everyone else. Such mechanics can include

Moroku welcomes discussions with mental wellness providers on the application of game design to their pursuit by email to success@moroku.com